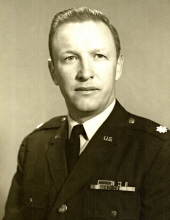 Arthur L. Corcoran, Jr., age 87, of Frisco, TX and with roots in Darke and Preble Counties, OH passed away Sunday, July 12, 2020 at a nursing center in Texas. He was born March 6, 1933 in Portland, Maine to the late Arthur L. Corcoran, Sr. and Mildred E. (Foster) Corcoran.  Arthur was a retired U.S. Air Force Veteran.  In addition to his parents, he was also preceded in death by his wife Patricia Ann Corcoran, who passed away in 2015; son Thomas A. Rettich Jr and daughter in-law Teresa (Eby) Rettich, who both passed away in 1984, and son in-law Craig Timms, who passed away in 2012. He is survived by his daughter Mariann Timms of Lodi, CA; son Arthur L. (Kim) Corcoran, III of Frisco, TX; 3 grandchildren: Megan N. Timms, Sean P. Corcoran, and Ryan C. Corcoran.  Visitation will be held on Friday, July 24, 2020 from 10:00 am until time of funeral services at 11:00 am at the Girton Schmidt & Boucher Gard Funeral Home, 226 West Main Street, Eaton, OH. Burial will follow at Twin Creek Cemetery, West Manchester, OH.  Memorial donations may be sent to the Air Force Museum Foundation.  Online condolences and other remembrances may be sent to the family by visiting www.gsbfuneralhome.com.
To order memorial trees or send flowers to the family in memory of Arthur L. Corcoran, Jr., please visit our flower store.