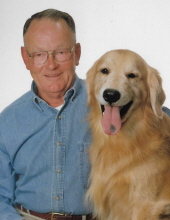 Charles D. Evilsizer, age 89, of Camden, passed away Wednesday, May 8, 2019 at the Garden Manor Care Center in Middletown. He was born February 6, 1930 in Lansing, MI to the late Charles F. and Mildred (Smith) Evilsizer. Charlie was a U.S. Army Veteran who served during the Korean War; he attended the Fort Wayne Bible College; worked for numerous years at various paper mills; dearly loved all of his golden retriever dogs and was very active with the Middletown/Dayton Dog Trainers Club; and had a great passion for running. In addition to his parents, he was also preceded in death by his wife Phyllis Ann Evilsizer and son Tim C. Evilsizer both in 2008. He is survived by his daughter Cindy (Tim) Balzer of Franklin; grandchildren: Bradley, Katie & Todd Fletcher all of Franklin; sister-in-law Barbara (Linden) Harter of West Manchester; nephew Ned Harter of West Manchester; great nephews Joel and Aaron Harter; and dear friend Randy Dynes of Middletown. Visitation will be held on Monday, May 13, 2019 from 10:00 am until time of funeral service at 11:00 am at the Girton Schmidt & Boucher Gard Funeral Home, 226 West Main Street, Eaton with Paul Nichols officiating. Burial will follow at Fairmount Cemetery in Camden. Memorial contributions may be sent to the Humane Society of Preble County, P.O. Box 72, Eaton, OH 45320. Online condolences and other remembrances may be sent to the family by visiting www.gsbfuneralhome.com.
To order memorial trees or send flowers to the family in memory of Charles D. Evilsizer, please visit our flower store.