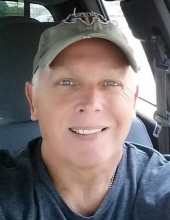 Daniel Wayne Byrd, age 53, passed away on Thursday, March 5, 2020. Danny was born at Middletown Hospital on June 19, 1966. He grew up in Middletown, Ohio and lived most of his adult life in Preble County, Ohio. He attended Madison Township schools and worked a variety of jobs during his lifetime. Once he began working commercial and industrial construction, he found his niche. He really enjoyed supervising those sites. Danny was also a fabulous woodworker. For a time, he owned and operated “Byrd Woodworking” from his home in Eaton. His woodworking shop was written up in a special edition magazine titled, “Dream Garages and Shops”. He could look at a piece of wood and transform it into beautiful cabinetry or furniture. He left his mark in several homes. Danny enjoyed hunting, hiking, fishing, kayaking, and flying his drone. He was extremely funny, witty and wonderful to be around. Just before Danny was diagnosed with Stage 4 Renal Cell Carcinoma in May of 2017, he had relocated to Florida to work in the construction field. The short time he was there, he enjoyed the area and all of the outdoor recreation with his girlfriend, Holly. That dream was cut short with his diagnosis. He wanted to be near family when he fought his cancer. Danny received his cancer treatments at Community Cancer Center East, Indianapolis, Indiana. Danny never complained about his health or say, “Why me?” He was very courageous in his fight. Danny leaves behind his son, Cody and his wife Amber and their two children Jada and Samuel. He is proud of their accomplishments and adores his grandchildren. He is sure they will go on to do great things. He is also survived by his parents, Robyn Terrell and Kerry Byrd and his step-mother, Brenda; his sisters, Dawn Williams and Donna Warman; brother-in-law, Darnell Williams and niece Carolyn Williams. Danny will be missed by his girlfriend, Holly Vereb and their cat, “Whitey Pants Jones”. There are many aunts, uncles and cousins that also survive him. The family would like to thank Dr. Bedano and his staff at Community Cancer Center East and to Butler/Warren Hospice. If you’d like, you may make a donation in Danny’s memory to either organization. Family and friends will be received on Saturday, March 14, 2020 from 2:00 pm until time of memorial service at 3:00 pm at the Girton Schmidt & Boucher Gard Funeral Home, 226 West Main Street, Eaton, OH. Online condolences may be sent to the family by visiting www.gsbfuneralhome.com.
To order memorial trees or send flowers to the family in memory of Daniel W. Byrd, please visit our flower store.