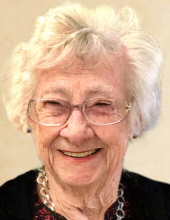 Doris “Dot” Horine Clark, age 91, of Eaton, OH, died Tuesday, July 6, 2021 at the Beavercreek Health and Rehab Center. Born on April 13, 1930 in Eaton to Alva Baxter and Lousettie Blanche (Deem) Horine in their family home on North Maple Street. Dot was blessed with 11 siblings. There were 6 sisters and 6 brothers and huge happy family reunions were frequently held. Her closest sister (by age and address) Jean DeHart survives her as does Dot’s youngest sister, Joan Schultz in Florida. Deceased: Helen, Dwight, Ray, Junior, Dale, Thelma, Ralph, Mary, Bob. She married Raymond Clark on August 25, 1947 and their marriage endured for over 60 years until Ray died at 88 on April 14, 2012. She fell in love with this handsome man at the Eagles Lodge and how they loved their country music and dancing. They were an unofficial welcome team to many new to the Eagles. They were proud parents of five children raised in Eaton. Doris supported them as a Girl Scout leader and Cub Scout den mother. Her son James served in the Army in Vietnam and upon return to the USA, he made his home with Dot and Ray until his death in 2017. Dot was a member of VFW 8066. Over the years, the family tree grew to 9 Grandchildren and 12 Great Grandchildren though Jim remained a bachelor. St. Paul United Methodist Church has supported Dot as their faithful member in her final years in assisted care. She served the church with many funeral dinners and as a member of Circle 6. Active for 50+years in Eaton’s Eagles Lodge, she served in many capacities in the F.O.E. Auxiliary: 2 term President, 10 years Secretary, District Leader 3 times, Zone Coordinator and in 2005 State Historian. Always ready to help others, Dot (with Ray) was a Red Cross volunteer who was awarded the Volunteer of the Year Award. She transported many Preble County residents to hospitals and doctor’s offices in Ohio and Indiana as a driver for 21 years. Dot loved mushroom hunting, Jeopardy on tv, playing cards (especially “hand and foot” canasta), and bowling. Dot was a wonderful cook but was very well-known for her potpie. Her first job was in a sewing factory (age 16); as an adult, she was a waitress and cook in the Blue Room Restaurant in Eaton. Dot was well liked as the cook for The St. Clair Academy for 10 years having also served as cook for the church’s day care. She cooked at the Eagles and the bowling alley too. Survivors include, her children: Dr. Karen Montgomery (Martin) of Bonita Springs, FL; Sharon Pfaff of Dayton; Barbara Geeting (Paul deceased) of Wathena, Kansas; and (Jeffrey deceased) daughter-in-law Brenda Clark of Eaton; and these grandchildren: Stephanie Montgomery Grabill (Michael) of Northbrook, IL; Christina Richardson (TJ) of Suwanee, GA; Lisa Daggs (Barry) of Dallas, TX; Tisha Hicks (Kevin) of St. Joseph, Missouri; Tracy Houck (Thorntie) of Titusville, FL; Talon Geeting (Kayce) of Elwood, KS; Faith Clark (Amanda) of West Chester; Hope Burrell (Spencer Glaze) of Eaton and Wesley Clark , Dayton. Doris was blessed with great grandchildren: Jackson and Leah Grabill; Jared Richardson; Carson and Caroline Daggs; Ethan Burrell & Ayla and Sylas Glaze; Hailey Hicks, Justin Chase Hicks; Temperance “Elle” Houck; and Allison and Kelsey Stroud-Geeting and Dakota Geeting. Visitation will be held on Saturday, July 10, 2021 from 1:00 pm until time of funeral services at 3:00 pm at the Girton Schmidt & Boucher Gard Funeral Home, 226 West Main Street, Eaton, OH with Pastor John Richards officiating. Burial will follow at Mound Hill Cemetery, Eaton, OH. In lieu of flowers, make Memorial contributions to St. Paul United Methodist Church at 120 N. Maple St. in Eaton, OH 45320. Online condolences and other remembrances may be sent to the family by visiting www.gsbfuneralhome.com.
To order memorial trees or send flowers to the family in memory of Doris "Dot" Clark, please visit our flower store.