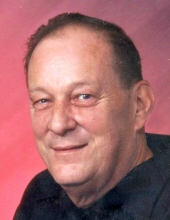 Gerald R. “Jerry” Thompson Sr., age 74, of Eaton, OH, passed away Sunday, March 25, 2018 at Kindred Hospital in Dayton. He was born May 13, 1943 in Glendale, OH to the late Raymond D. and Gertrude (Riouff) Thompson. Jerry was a 1961 graduate of Eaton High School. He was employed with the City of Eaton Police Department for many years as a Dispatcher in 1975, Patrolman in 1978, Sergeant in 1981 and Chief in 1998 until his retirement in 2000. He was also a volunteer firefighter with Eaton Fire Division for many years. He was a member of the American Legion Post #38 in Somerset, KY. In addition to his parents, he was also preceded in death by his second wife Susan J. Copp Thompson in 2002. He is survived by his wife of 10 years, Patricia J. Thompson of Eaton, OH; son Jerry (Jenny) Thompson, Jr. of Eaton, OH; stepdaughter Lori Hall of Gahanna, OH; stepson Rick (Edyta) Hall of Huntsville, AL; stepdaughter Amy (Rick) Napier of Eaton, OH; stepdaughter Brandy (Clay) Grassmann of Eaton, OH; numerous grandchildren and great grandchildren; sister Linda (Gary) Dull of Tennessee; and several nieces and nephews. Funeral services will be held at 11:00 am on Friday, March 30, 2018 at the Girton Schmidt & Boucher Gard Funeral Home, 226 West Main Street, Eaton, OH with Pastor Ray Sowder officiating. Burial will follow at Mound Hill Cemetery in Eaton. Visitation will be held on Thursday, March 29, 2018 from 4:00 to 8:00 pm at the funeral home. Memorial contributions may be made to the Eaton Police Association. Online condolences may be sent to the family by visiting www.gsbfuneralhome.com.
To order memorial trees or send flowers to the family in memory of Gerald R. "Jerry" Thompson Sr., please visit our flower store.