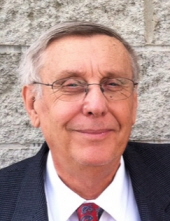 Robert E. “Bobby” Booher, age 72, of Camden, OH, passed away Sunday, February 24, 2019. He was born February 2, 1947 in Richmond, IN to the late Charles R. “Chuck” and Willie R. (Barr) Booher. Bobby was a 1965 graduate of Eaton High School and graduated from Automotive Mechanics Tech School in St. Louis, MO. He was a U.S. Air Force Veteran who served in the Vietnam War. Following his military service, he worked as a Master Mechanic for many years and later became an Automotive Products Salesman up to his retirement. Survivors include his wife of 52 years, Amber M. Booher; daughter Tammy (Paul) McCarthy; grandchildren, Kailey McCarthy and Shaun McCarthy; aunts Pauline Jones and Thelma Barr; brother-in-law Robert (Ginger) Redman; and numerous extended family members and many special friends in Ohio and Illinois. Visitation will be held on Thursday, February 28, 2019 from 4:00 pm until time of funeral services at 7:00 pm at the Girton-Schmidt-Boucher Funeral Home, Eaton, OH with Michael D. Booher, Minister officiating. A committal service will be held at 10:15 am on Friday, March 1, 2019 at the Dayton National VA Cemetery with military honors provided by the Preble County Honor Guard and U.S. Air Force. Memorial contributions may be made to Wounded Warrior Project, P.O. Box 758517, Topeka, Kansas 66675-8517. Online condolences and other remembrances may be sent to the family by visiting www.gsbfuneralhome.com.
To order memorial trees or send flowers to the family in memory of Robert E. "Bobby" Booher, please visit our flower store.