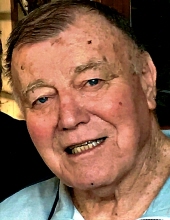 Robert A. Bourne, age 86, of Eaton, passed away Saturday, April 28, 2018 at Vancrest Health Care Center. He was born February 11, 1932 in Eaton to the late Fayette I. and Mary J. (Fleenor) Bourne. Bob was a U.S. Air Force Veteran who served during the Korean War and was a member of the American Legion Post #215; he attended Earlham College before entering the military; he worked at NCR in Dayton for 23 years and Henny Penny Corporation in Eaton for another 25 years; he was a member of the Bolivar Masonic Lodge #82, F.&A.M., where he also served as Past Master; was a member of the Antioch Shrine in Dayton where he served with the Marching Patrol; he was a volunteer with the Eaton Little League for 31 years; was a former Eaton City Council Member and Vice Mayor; he supervised the construction of the Preble County YMCA; and was a past L&M Board Member. In addition to his parents, he was also preceded in death by his brother William Bourne. He is survived by his wife Betty J. Bourne of Eaton; daughters: Vickie (Bob) Volkerding and Kanita Fortney both of Eaton; grandchildren: Shaun (Melissa) Walters of New Lebanon, Anthony Walters of Arcanum, Ryan (Jill) Volkerding of Columbus, Bethany (Ryan) Andrus of Kalamazoo, MI and Nicholas (Devianna) Walters of Charlotte, NC; great grandchildren: Michael, Jack, Ava and Owen; sister Frances Koons of Eaton; brother Ronald (Freda) Bourne of Amherst, OH; and several nieces and nephews. Family and friends will be received on Thursday, May 3, 2018 from 4:00 pm until time of Memorial service, Masonic service and Military Honors at 6:00 pm at the Girton Schmidt & Boucher Gard Funeral Home, 226 West Main Street, Eaton with Pastor Ted Dennis officiating. Memorial contributions may be made to the Shriners Hospitals for Children or The Michael J. Fox Foundation for Parkinson’s Research. Online condolences and other remembrances may be sent to the family by visiting www.gsbfuneralhome.com.
To order memorial trees or send flowers to the family in memory of Robert A. Bourne, please visit our flower store.