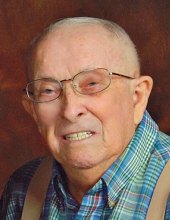 Carl Robert “Bob” Byrne, age 94, of Eaton, OH passed away peacefully Tuesday, February 13, 2018 at Vancrest Nursing Center in Eaton, OH. He was born on June 21, 1923 in Cement City, Michigan to the late David F and Catherine (Deem) Byrne. Bob married Wanda in 1951. They were married for 66 years and had four children; Bobby, Carla, Amy, and Jason. He was preceded in death by his Parents; Sisters Carrie (Sam) Kisling, Frances (Chelcie) Preston, and Mondina (Pete) Studebaker; Half-sister Marie Ruby; and Half-brother Delbert Bradford. He is survived by: wife, Wanda (Satterfield); Sons Robert Byrne (Janice Stewart) of Grove City, Ohio and Peter (Amy) Byrne of Eaton, Ohio; Daughters Carla Griffith and Amy Wynn both of Eaton, Ohio; Grandchildren Toni Morgan, Lyndsey (Bruce) Burns, Courtney Griffith, Michelle (Nick) Hodownes, Jordan Demarco, Kennedy Smith, Jake Byrne, Luke Byrne, Atlantis Smith, and Jayden Smith; Great-grandchildren Kaliegh, Darius, Jahad, Raya, and Alexius; and Nieces and Nephews. Bob was a veteran of the United States Navy where he spent 12 years in the Pacific during World War II and the Korean Conflict. While in the Navy he attended Naval Ordinance Disposal and Deep-Sea Diving schools becoming an Underwater Ordinance Technician. Bob held positions on many community boards including the Preble County Chamber of Commerce (past President), the Preble County Parks and Recreation Board, and the Ohio County Home Association. He retired as Superintendent of the Preble County Home (now Vancrest). Bob was a member of Eaton First Church of the Nazarene where he held many positions and has been honored with the Heritage and Distinguished Service Awards. He was an avid golfer and bowler. Bob sang barbershop for 40+ years with the Razor’s Edge out of Middletown Ohio and was named Barbershopper of the Year in 1996. Funeral Services will be held at 11:00 am on Friday, February 16, 2018 at the Eaton First Church of the Nazarene, 201 E Lexington Rd, Eaton, OH with Pastor Jim High and Pastor Brian Deaton officiating. Burial will follow at Preble Memory Gardens in West Alexandria with full military honors provided by the Preble County Honor Guard. Visitation will be held on Thursday, February 15, 2018 from 6:00 to 8:00 pm and one hour prior to services on Friday, all at the church. Memorial contributions may be sent to Honor Flight of Dayton, Inc, Attn: Al Bailey, 200 Canary Court, Enon OH 45323. Online condolences may be sent to the family by visiting www.gsbfuneralhome.com.
To order memorial trees or send flowers to the family in memory of Robert Byrne, please visit our flower store.