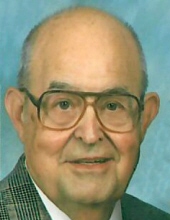 Robert L. “Bob” Miller, age 94, of Eaton, OH passed away Monday, February 17, 2020 at Reid Hospital in Richmond, IN. He was born on May 27, 1925 in Detroit, MI to the late Glenn C. and Marie (Warstler) Miller. Bob was a lifetime member of the Eaton Church of the Brethren where he was a Sunday School teacher to the youth for a number of years. In addition to his parents, he was preceded in death by a brother Donald, sisters Lucile Miller Johnson and Louise Holt and granddaughter Tara Marie Miller. He is survived by his wife, Ruth Crowell Miller, for 71 years; daughter Cynthia (Daryl) Foster; son Timothy (Nancy Rossman) Miller; 5 grandchildren, 8 great grandchildren and 1 great great grandson; brother-in-law Paul Holt. Robert and his wife amassed an extraordinary extensive personal collection of M.I. Hummel figurines. His expertise and knowledge of all things Hummel had earned him international recognition in his collecting field. He authored numerous Hummel books and the very well-known No 1 Price Guide. He and his wife traveled worldwide escorting Hummel Tours for many years. Bob was very proud to have served in the U.S. Army during World War II. After graduation in 1943, he was sent to Europe where he spent 2 years with the 8th armored division through France, Germany, Belgium, etc. fighting until the end of the war. He returned to the U.S. and joined his father and brother in the food business where they built the very first supermarket in Eaton, Ohio called Miller’s Supermarket. Robert was president of White Villa grocers in Dayton, Ohio for over 20 years. He was a director at the Preble County National Bank until his retirement. He was a lifetime member of the Eaton Lion’s Club. Bob was also instrumental in legally making Eaton, Ohio and Rodental, Germany Sister Cities, followed by numerous group exchange visits by both cities through the years. Visitation will be held on Thursday, February 20, 2020 from 10:00 am until time of funeral service at 12:00 noon at the Eaton Community Church, 813 Camden Road, Eaton, OH 45320 with Pastor Dan Denlinger officiating. Burial will follow at Mound Hill Cemetery in Eaton. Memorial contributions may be sent to the Eaton Community Church. Online condolences and other remembrances may be sent to the family by visiting www.gsbfuneralhome.com.
To order memorial trees or send flowers to the family in memory of Robert L Miller, please visit our flower store.